It's finally time to push Is It SQL 1.0.25 out the door. I sent it to the newsletter subscribers last week and we haven't discovered any problems yet.

Before upgrading, please read the README in the zip file! Especially if you have custom connection strings and this is running as a service. I rewrote it just for this release. And there are some security and encryption implications in this release that you need to understand.

The first big change is that we now have a simple GUI for servers and settings. You can access this via the little gears icon in the header menu. 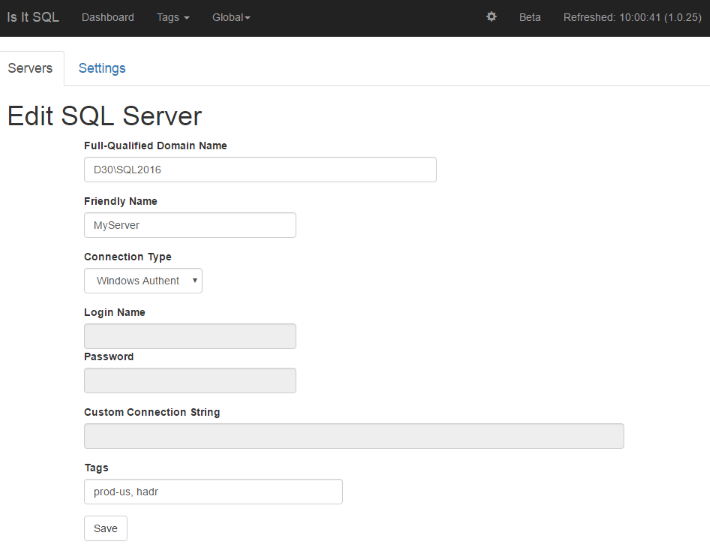 This replaces the servers.txt file. You can add, edit and delete servers through this.

If you're upgrading, it will import your servers.txt and rename it as servers_imported_YYYYMMDD.txt or something like that. I'd also encourage you to delete this file -- especially if it has custom connection strings with passwords.

All the server connections are stored in connections.json in the config directory. Any password or custom connection string is encrypted in the file. It's encrypted using the Windows DPAPI based on the account that is running the application. This makes changing the service account or machine hosting this tricky so I encourage you to get that right.

Previously every server was assigned a URL in the format http://localhost:8143/server/S1. And the number part was assigned based on the order of the server in servers.txt. Putting the servers in a JSON configuration file and controlling the edit process means I can finally have consistent URLs. And of course they're GUIDs!

So the URL for a server is now something like this:

And that GUID won't change. That should make it easier to bookmark servers.

There are a few basic settings you can control. These include:

Every setting except the port takes effect immediately.

There are lots of smaller changes in this release.

Give it a try and let me know what you think. My email is in the README or you can use the scaleSQL contact page to reach me. I also added an Is It SQL support forum to the SQLTeam Forums if you'd like to chat there.

I'd like to tell you this release has some great unifying theme.…

The latest release of Is It SQL now shows missing backups. Backups…