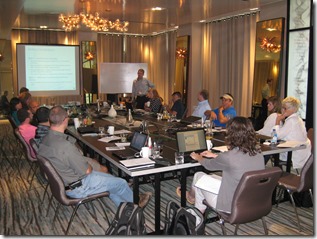 PASS launched a Global Growth Initiative in the Summer of 2011 with the appointment of three international Board advisors.  Since then we’ve thought and talked extensively about how we make PASS more relevant to our members outside the US and Canada.  We’ve collected much of that discussion in our Global Growth site.  You can find vision documents, plans, governance proposals, feedback sites, and transcripts of Twitter chats and town hall meetings.  We also address these plans at the Board Q&A during the 2012 Summit.

One of the biggest changes coming out of this process is around how we elect Board members.  And that requires a change to the bylaws.  We published the proposed bylaw changes as a red-lined document so you can clearly see the changes.

Our goal in these bylaw changes was to address the changes required by the global growth initiatives, conduct a legal review of the document and address other minor issues in the document.  There are numerous small wording changes throughout the document.  For example, we replaced every reference of “The Corporation” with the word “PASS” so it now reads “PASS is organized…”.

The biggest change in these bylaw changes is how the Board is composed and elected.  This discussion starts in section VI.2.  This section now says that some elected directors will come from geographic regions.  I think this is the best way to make sure we give all of our members a voice in the leadership of the organization.  The key parts of this section are:

We also understand that PASS is currently a very US-centric organization.  Our Summit is held in America, roughly half our chapters are in the US and Canada and most of the Board members over the last ten years have come from America.  We wanted to reflect that by making sure that our US and Canadian volunteers would continue to play a significant role by ensuring that two Regional seats are reserved specifically for Canada and the US.

Other than that, the bylaws don’t create any specific regional seats.  These rules allow us to create Regional Director seats but don’t require it.  We haven’t fully discussed what the criteria will be in order for a region to have a seat designated for it or how many regions there will be.  In our discussions we’ve broadly discussed regions for

As you can see, our thinking is that there will be a few large regions.  I’ve also considered a non-North America region that we can gradually split into the regions above as our membership grows in those areas.

The regions will be defined by a policy document that will be published prior to the elections. I’m hoping that over the next year we can begin to publish more of what we do as Board-approved policy documents.

While the bylaws only require a single non-region specific At-large Director, I would expect we would always have two.  That way we can have one in each election.  I think it’s important that we always have one seat open that anyone who is eligible to run for the Board can contest.  The Board is required to have any regions defined prior to the start of the election process.

We spent a lot of time discussing how the elections would work for these Regional Director seats.  Ultimately we decided that the simplest solution is that every PASS member should vote for every open seat.  Section VIII.3 reads:

Candidates who are eligible (i.e. eligible to serve in such capacity subject to the criteria set forth herein or adopted by the Board of Directors) shall be designated to fill open Board seats in the following order of priority on the basis of total votes received: (i) full term Regional Director seats, (ii) full term Director-at-Large seats, (iii) not full term (vacated) Regional Director seats, (iv) not full term (vacated) Director-at-Large seats. For the purposes of clarity, because of eligibility requirements, it is contemplated that the candidates designated to the open Board seats may not receive more votes than certain other candidates who are not selected to the Board.

We debated whether to have multiple ballots or one single ballot.  Multiple ballot elections get complicated quickly.  Let’s say we have a ballot for US/Canada and one for Region 2.  After that we’d need a mechanism to merge those two together and come up with the winner of the at-large seat or have another election for the at-large position.

We think the best way to do this is a single ballot and putting the highest vote getters into the most restrictive seats.  Let’s look at an example:

There are seats open for Region 1, Region 2 and at-large.  The election results are as follows:

The other change to the election process is for vacant Board seats.  The actual changes are sprinkled throughout the document.

Previously we didn’t have a mechanism that allowed for an election of a Board seat that we knew would be vacant in the future.  The most common case is when a Board members moves to an Officer role in the middle of their term.  One of the key changes is to allow the number of votes members have to match the number of open seats.  This allows each voter to express their preference on all open seats.  This only applies when we know about the opening prior to the call for nominations.  This all means that if there’s a seat will be open at the start of the next Board term, and we know about it prior to the call for nominations, we can include that seat in the elections.  Ultimately, the aim is to have PASS members decide who sits on the Board in as many situations as possible.

We discussed the option of changing the bylaws to just take next highest vote-getter in all other cases.  I think that’s wrong for the following reasons:

I think the majority of vacancies in the future will be handled through elections.  The bylaw section quoted above also indicates that partial term vacancies will be filled after the full term seats are filled.

Any Director may be removed for cause by a 2/3 majority vote of the Board of Directors whenever in its judgment the best interests of PASS would be served thereby.

Notwithstanding the foregoing, the authority of any Director to act as in an official capacity as a Director or Officer of PASS may be suspended by the Board of Directors for cause.

Cause for suspension or removal of a Director shall include but not be limited to failure to meet any Board-approved performance expectations or the presence of a reason for suspension or dismissal as listed in Addendum B of these Bylaws.

The first paragraph is updated and the second and third are unchanged (except cleaning up language).  If you scroll down and look at Addendum B of these bylaws you find the following:

Cause for suspension or dismissal of a member of the Board of Directors may include:

The bold line about your inability to represent your region is what we added to the bylaws in this revision.  We also added a clause to section VII.3 allowing the Board to remove an officer.  That clause is much less restrictive.  It doesn’t require cause and only requires a simple majority.

The Board of Directors may remove any Officer whenever in their judgment the best interests of PASS shall be served by such removal.

There are numerous other small changes throughout the document.

Proxy voting.  The laws around how members and Board members proxy votes are specific in Illinois law.  PASS is an Illinois corporation and is subject to Illinois laws.  We changed section IV.5 to come into compliance with those laws.  Specifically this says you can only vote through a proxy if you have a written proxy through your authorized attorney.

English language proficiency.  As we increase our global footprint we come across more members that aren’t native English speakers.  The business of PASS is conducted in English and it’s important that our Board members speak English.  If we get big enough to afford translators, we may be able to relax this but right now we need English language skills for effective Board members.

Committees.  The language around committees in section IX is old and dated.  Our lawyers advised us to clean it up.  This section specifically applies to any committees that the Board may form outside of portfolios.  We removed the term limits, quorum and vacancies clause.  We don’t currently have any committees that this would apply to.  The Nominating Committee is covered elsewhere in the bylaws.

Electronic Votes.  The change allows the Board to vote via email but the results must be unanimous.  This is to conform with Illinois state law.

Immediate Past President.  There was no mechanism to fill the IPP role if an outgoing President chose not to participate.  We changed section VII.8 to allow the Board to invite any previous President to fill the role by majority vote.

Revocation of Charters. The language surrounding the revocation of charters for local groups was flagged by the lawyers. We have allowed for the local user group to make all necessary payment before considering returning of items to PASS if required.

Bylaw notification. We’ve spent countless meetings working on these bylaws with the intent to not open them again any time in the near future. Should the bylaws be opened again, we have included a clause ensuring that the PASS membership is involved. I’m proud that the Board has remained committed to transparency and accountability to members. This clause will require that same level of commitment in the future even when all the current Board members have rolled off.