What a night!  Mario Chalmers hits a last second three to send the game into overtime and KU rolls from there.  Twenty years ago when KU won their last national championship I was at KU.  I just had to head down to Lawrence and enjoy the party again.  These pictures are from downtown Lawrence.  They had 5-6 blocks cordoned off and it was wall to wall people.  What a fantastic night! 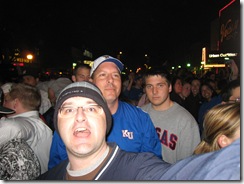 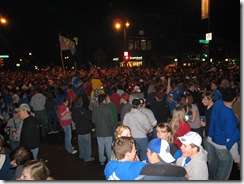 That's me in front with a buddy from high school and his son.  And various crowd shots.  There were so many people.  Just amazing!

I'm in Germany for the PASS conference this week.  We all went…

I attended the SQL Server 2008 launch in Los Angeles for PASS.…