I stared SQLTeam.com nearly ten years ago.  I wanted to build a place where people could learn about SQL Server.  In the early days we had something called "Ask SQLTeam".  People could submit questions and we'd use those to get ideas for articles.  We tried to answer as many as we could on the site.  Gradually the flood of questions became too much and that changed into the forums you see on the site today.

Today we're bringing Ask SQLTeam back.  But in a different way.

I've watched the success of http://stackoverflow.com with interest.  It has a couple of features that I really, really like.  It's focused on getting great answers to questions and that answer is determined by the users.  It's got much of what I wish I'd been able to write for SQLTeam.com. The people behind StackOverflow are making the software available to third-parties. I've signed up and I'm using the software behind the new Ask SQLTeam.

I've always taken great pride that the forums on SQLTeam were a great place to get questions answered.  The members take pride in getting people's problems solved.  The same thing will be true on ask.sqlteam.com.

I'd like to invite you to visit the site at ask.sqlteam.com.  Take the question that you going to post in the forums and try it out there.  You'd don't even need to register in order to post a question.  Take a minute and answer a few questions.  After ten years of doing this I’ve realized there are always more questions coming.

If you’re not familiar with the StackOverflow concept you can read our FAQ at http://ask.sqlteam.com/faq. As questions are asked, multiple people can answer and vote on which answer is the best.  It will be easy to see which answer the community voted up and what answer was chosen by the person that asked the question.

The SQLTeam.com forums aren’t going away and will always be a great place to have a discussion on SQL Server.  I’d encourage you to take a look at http://ask.sqlteam.com though.  I think it will be a great place to get SQL Server questions answered.  You can use either -- or both. It's up to you. 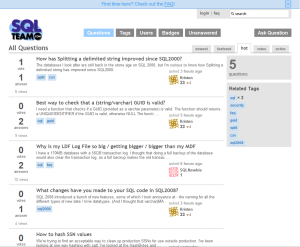 Last week we launched Ask SQLTeam as an alternative to our forums.…

Sessions for new DBAs at PASS